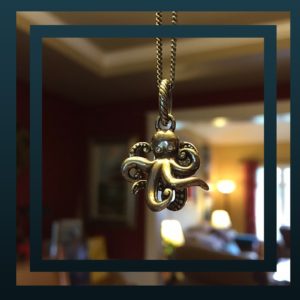 Reposting from March, 2016. I have this little octopus pendant that I wear and people often comment on it. I’ve been asked several times if it holds significance for me. It does.

My son fell out a second story window when he was three and fractured his skull. He spent six days in intensive care. He was intubated for the first three days and had a bolt drilled into his brain to monitor the bleed. It was traumatic in more ways than one, but God is good and my son emerged miraculously intact. He’s ten now and he’s bright, articulate, funny, and charming. He’s also moody. A lot of ten year old boys are­­— but he has ADHD and can be hypersensitive at times.

We were told that the impact to his frontal lobe might make him angry and impulsive. I decided to channel my anxiety over what that might mean for him into teaching him coping skills. END_OF_DOCUMENT_TOKEN_TO_BE_REPLACED