I’m reading a fantastic book about artists, in particular writers though it transcends that, and the role of Christianity. It’s incredibly inspiring and I want to share a few tidbits: 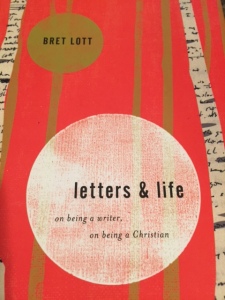 Bret Lott, in Letters and Life: On Being a Writer, On Being a Christian, points out that the words angst and epiphany have essentially been misappropriated by the secular world. I’m going to liberally paraphrase in the interest of keeping this short.

Lott’s perspective on the word epiphany: “the ‘shining forth’ or revelation of God to man in the person of Jesus Christ” is now most often defined as “a kind of psychological reckoning of characters (individuals) to themselves and their world.”

He goes on to refer to Soren Kierkegaard’s definition of angst as “the anxiety felt deep in man’s heart when faced with the uncrossable chasm between God and our broken world.”

He says “once stolen, these words moved from the shining forth of Christ to the shining forth of man, and from the sense of fear and trembling at the approach to the throne of grace, to the sense of fear and trembling over a purposeless and pointless life.” Later he points out that man has “placed himself on the throne of meaning and purpose…” This resonates with me, I feel like I see this play out daily.

I used to struggle with the idea of losing my individuality and creativity if I submitted myself as an artist to God. Instead, I have grown to understand that all good things stem from HIM and can only be fully realized by giving ourselves over to HIS will. Inspiration is often fueled by pain and in my mind pain equaled separation from God because pain often stems from sin. I have since come to understand that we experience God in the middle of this in in a very powerful way. Lott states than he recognizes “that art stems oftentimes from the broken, that true and meaningful creation can and often does find its being through shattered lives.”  He points out that it doesn’t mean “the creators of that art must be slaphappy folks just makin’ art for the Lord.”

My take away? Whether we are artists or called to other roles, we struggle to define the God shaped hole in all our lives and most of us have witnessed the havoc filling it with anything but God can wreak. If we truly believe in a supernatural God, and I do (as Bret Lott also states he does), we must put a stake in the ground and proceed as such. I feel challenged almost daily to shift my perspective and try to view the world with kingdom eyes. I pray for a fresh perspective for us all today.

One thought on “Shifting My Perspective”